Warning: Declaration of Bootstrap_Walker_Nav_Menu::start_lvl(&$output, $depth) should be compatible with Walker_Nav_Menu::start_lvl(&$output, $depth = 0, $args = NULL) in /homepages/36/d150298939/htdocs/istinaDesigns_wp/wp-content/themes/istinaDesign_2013/functions.php on line 729
 » Halloween Costumes? No Sweat!! - istina design 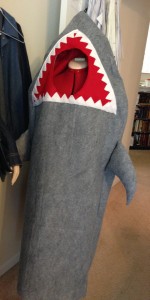 I thought I would take a break from fashion advice to delve into something seasonal – Halloween. After taking a short trip down memory lane and the costumes we came up with when my kids were young, I took a look around the current supply of costumes generally available. As usual, they are all the same with little imagination and very one dimensional. Lets liven up life.

With a sewing machine and the most basic of sewing experience just about any costumes for small children is incredibly easy. With Halloween right around the corner, I, of course, got asked and decided to take a fun break to fulfill the costume request of a young family member. Thought it would be fun to put this DIY project in the blog.

Remember, this costumes are for temporary use, doesn’t have to be perfect to create the desired effect, and only needs the most basic of fitting. (I used 2 measurements to create the requested costume.). And the thrill of a child of having such a fantasy fulfilled where they can dive into a world of their imagination makes the time constructing the costume seem insignificant. It will become a fond memory for both of you.

With the massive amounts of information available on the Internet now, it has never been easier to get ideas and how-to help from the elaborate to the most basic. If you can’t seem to find something within your skill set just keep browsing.

Certain truths apply to whatever creature your little one wants to be.
1st-Felt is the fabric of choice. Anything that needs any amount of body (firmness) and doesn’t need to float or flutter can be made of felt. It is easy to sew.It does NOT need to be hemmed. It does NOT ravel. It can be stitched with seams showing or not. (If seams are on the outside, just trim the felt to an 1/8” outside the seam).
2nd-Simple is best. As long as the costume has the major feature of the creature – in my case, gaping red mouth and white shark teeth – it will be more than sufficient for little ones.

So when my grandson decided after Shark Week that he absolutely HAD to be a shark for Halloween, I took to the net.

After hunting for about 30 minutes and wandering through dozens of DIY solutions here is the pattern and directions I settled on:
www.ashnola6.files.wordpress.com/2011/05/shark-costume-instructions1.pdf 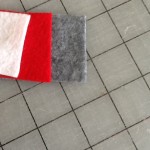 Substituting grey felt for the grey “material” gave the costume much more body and durability.

Red felt for the mouth.

white felt for the teeth completed my purchase.

Construction – Mistakes are the Greatest Discoveries!

Biggest hurdle in the construction was making, turning and stuffing the fins. Even those don’t have to be accurate just a good resemblance. Just don’t overstuff.

Before stitching the sides together I glued on the red mouth and cut and glued teeth to the ‘face’ of the shark.

I did do some additional measuring to see what size to make the oval for the face opening. Before actually cutting it out of the costume, I cut it out of a piece of paper to be sure it was the right size. I started small and kept trimming until it was large enough. Even then it came out a little large. I was upset by the he wasn’t. He quickly discovered he could wear it with his head and one arm through the too large opening and become a kid being eaten by a shark. Small mistake turned into a big plus!!

The directions called for making a pillow to strap to his head to make the point of the shark sit higher than his head. That seemed rough for an nine year old to manage so I changed the pattern and made a ‘mouth’ attached to the top of the face opening and creating a pocket for his head. Problem solved. His head fit right into the pocket and the shark stood tall.

Eyes glued on – no way. Purchased eyes worked better and were put on days later.

The entire costume cost a grand total of $20 and took me a Sunday afternoon to make. Give yourself plenty of time – even a number of days and above all – HAVE FUN. Perfection is an adult ailment. The love of a child for his or hers heart’s desire is a blessing to the world.