Sunday’s Oscars gave a fresh dose of the good and the ugly dressing. All the stars were dressed to the nines. Some enhanced their appearance by acknowledging and dressing to their body shape and others just followed the whim of fashion. 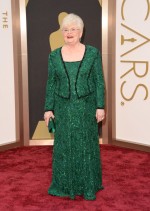 It was doubly refreshing to see an Earth Goddess (aka an Apple)   empower herself and dress beautifully rather than ignore or lose herself in the crowd. Sunday night June Squibb did just that. The ‘jacket lapel’ lines in the sequining of her dress divided her voluptuous figure into thirds and created beautiful slimming lines. Moving the viewers’ eyes up towards her face creates additional height to her figure and a slimming effect. Doing that, she could express her inner diva with sequins from head to toe (something that old Apple is told to avoid) and still be gorgeous. 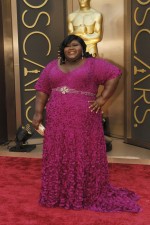 Unfortunately, another Earth Goddess, Gabourney Sidibe, did the exact opposite with her attire Sunday night. Wearing a narrow belt around the fullest part of her torso only drew attention to that measurement and moved the viewer’s eyes from side to side as well as shortening (and thereby widening) her figure. Nothing else in her attire countered this. A very typical Earth Goddess, she ignored her body shape to focus rather on the world around her. I applaud that outward focus and care. However little inward attention to her body shape would send the message to that world that she is someone to listen to.

Caring and focusing on the world and people around you is important in this day and time. However, focusing a bit on yourself and dressing to your assets tells the world that you value yourself and projects to the world that you are an empowered woman presenting your best self and someone to be listened to. The how-to for you Earth Goddesses and all the other body shapes are easy to learn and apply. I have a free e-book in my store giving you the scoop on all the body shapes, Know Your BodyShape